Overcoming the fear of falling… or failing.

It’s a rare quiet moment in this house. The boys got a little extra sleep last night after weeks of night waking and very early mornings. They are content digging through craft bins and creating masterpieces while they quietly sing to themselves. I have no doubt it won’t last long, but I am filled with gratitude for this moment. I am filled with gratitude for their contentment, something we don’t see often enough around here.

I think I am more acutely aware of the moments of simple and profound joy because of our struggles. A few weeks ago, my first grader learned to ride his bike without training wheels. It’s an exciting day for any kid – the joy, the pride, the freedom. It was definitely all that for B. Just a few months away from his seventh birthday, most of his friends were riding confidently on two wheels, and I think B could have been some time ago. But he was scared. He was scared he wouldn’t be able to do it. He was scared of falling, yes, but more so he was afraid of failing. 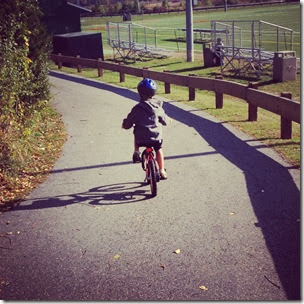 When B gets an idea into his head, his anxiety takes it and runs with it. It grows so large that he is constantly in a state of fight or flight not knowing which to do. For more than six months, B refused to even try to ride his bike without training wheels. When you mentioned it, his whole body would tense and he’d get very angry. He didn’t know what else to do. He had to protect himself from the fears.

So a few weeks ago, I suggested that B take to the really big hills surrounding our house on his balance bike. We’d taken a slightly smaller bike and removed the pedals so he could practice his balance. Up until this point, it hadn’t done a lot of good. We’d spent years telling the boys to not take anything with wheels down our steep driveway or the front or back yards. They are fierce for sledding but a recipe for stitches and broken bones with small boys on wheels. He was bigger now, and I thought it was worth a try.

B wasn’t sure about my suggestion but he hesitantly put on his helmet and grabbed the bike. He started on smaller hills and quickly got to bigger/steeper ones. I stood to the side cringing pretty sure he was going to topple over the front of his bike on the steepest ones, but I was thrilled he was taking the risks and figuring it out. Finally, he figured out he could go down the long hill of a driveway in the church parking lot and with the momentum continue to ride around at the bottom. His balance was perfect. 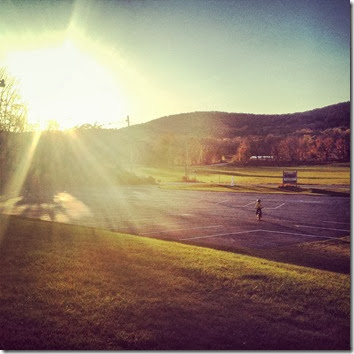 The next day, his Dad tentatively suggested they try the two-wheeler with pedals. They took it over to the church parking lot not sure how it would go. We all knew B could do it, but we weren’t sure if he was ready to risk falling/failing. My husband was getting our younger son set up on his tricycle before helping B, and before he could finish he turned around to see B gleefully riding circles in the parking lot. I was inside cooking dinner and got a phone call to come outside so B could show me something. I figured he was riding the bike, but honestly nothing could have prepared me for what I saw.

There B was, confidently doing figure eights across the parking lot. He looked like he’d been riding for months, but the truly breathtaking part was his joy. He was absolutely cackling with joy as he pedaled his legs as fast as he could. I could hear it across the parking lot, across the yard, from my front porch. His joy filled the air and turned everything it touched. The sun shined brighter. The grass was greener. I could feel it in my toes. With tears in my eyes, I was grinning so hard my face hurt. It wasn’t that my boy was riding a 2 wheeler. That was cool. But really, it was that he had taken a risk, he had pushed his anxiety aside and tried something hard, and the resulting pride and joy were so big he couldn’t keep them in if he tried. 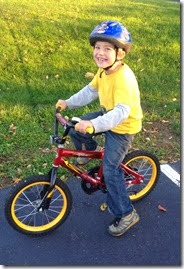 I recently read an interview with Sara Blakely, founder of Spanx. I was drawn by its title:

She explains in the interview that every week her dad would ask her, “what have you failed at this week?” He would high five her failures as much as he would her successes. If she didn’t fail at something, it meant she wasn’t putting herself out there enough. We’ve all heard that failures are learning opportunities, stepping stones, and all that. But I just love this idea of truly congratulating ourselves when we fail. We tried something hard. We put ourselves out there. It didn’t work out, but it meant we weren’t sitting at home twiddling our thumbs or hiding under the covers.

I hope I can share this with my kids. I hope I can give them an example of being brave, putting myself out there, and not letting a fear of failure win. There’s a beautiful resilience modeled in the applause of failure. I think I will start by asking myself
“what have I failed at this week?” in the hopes of showing my boys while they are young that not only is it ok to fail but it’s a sign you’re living life out loud and equipping yourself for success.

So, what have you failed at today?

I want to hear from you! Leave your comments.

It may not show up immediately because I moderate comments due to spam. I promise I'll get to it as soon as possible and look forward to talking to you!

Jamie @ *that* mom
I'm mama to three awesome kids. I write about everything including but not limited to life as a pastor's wife, parenting a transgender kid, my (sometimes long lost) love of running, holistic parenting, raising kids up in faith, living in a way that respects and enjoys the earth, my ongoing battle with depression and anxiety, and of course my *that* mom moments when motherhood leaves me doing things I never imagined or even swore I'd never do. 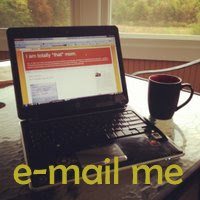